Choosing areas that are representative of the crop

To get an accurate estimation of crop ground cover a minimum of three images are needed per crop per week. Since each image may record an area of crop of only 1 – 2 m2 it is critical that, collectively, the images are representative of the entire cropped area. Whilst this can be difficult, use the following guidelines will help you to select representative sampling sites:

Areas where the planter has missed plants (unless the problem is over the entire cropped area).

Taking images of diseased or damaged plants (unless the problem is widespread over the entire cropped area).

As well as avoiding the areas outlined above it is recommend that all sample sites are located at least 50 m (160 feet) from the field margin or row end.

Sample sites should be uniformly spaced over the entire cropped area.

Best practice is to re-sample the same sites each week. Mark the sampling sites with a cane or flag so they can easily be relocated. 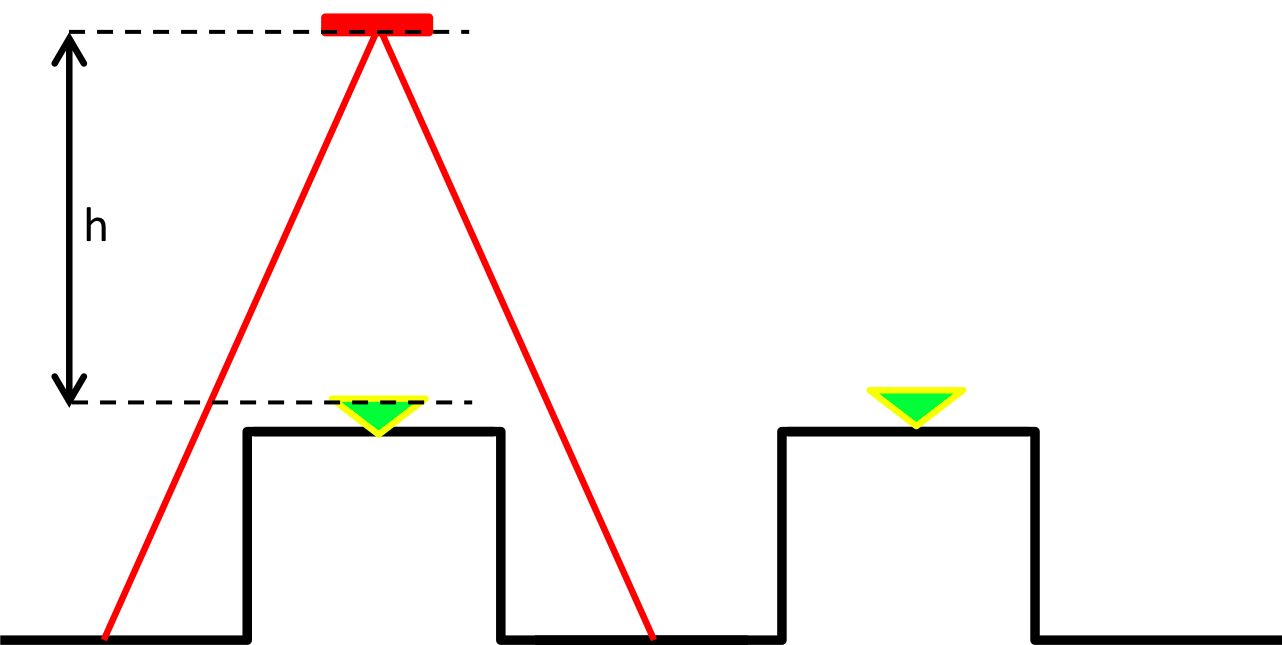 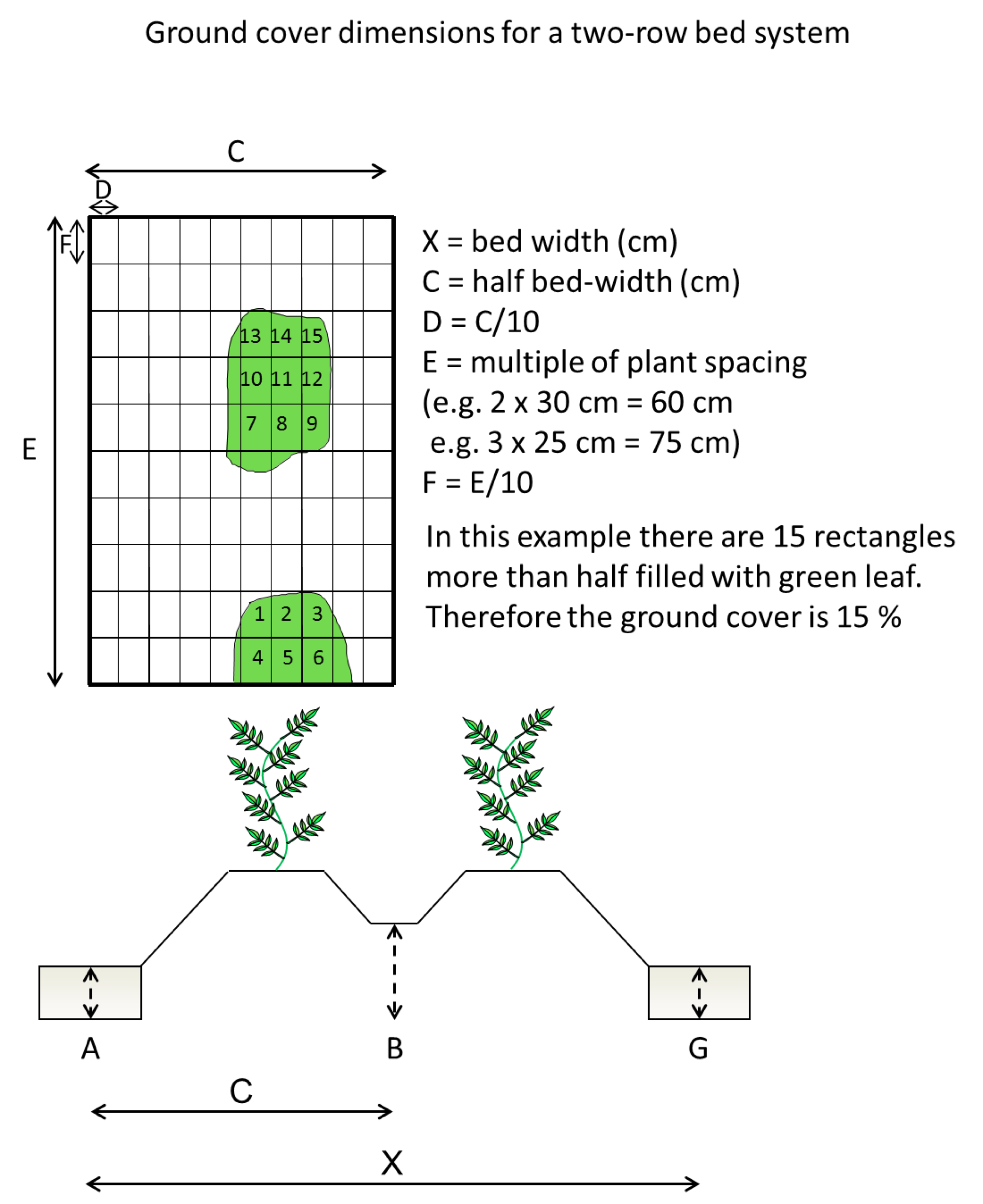 Figure 1. Orientation of phone or tablet in relation to rows/furrows in single row or two-row planting. 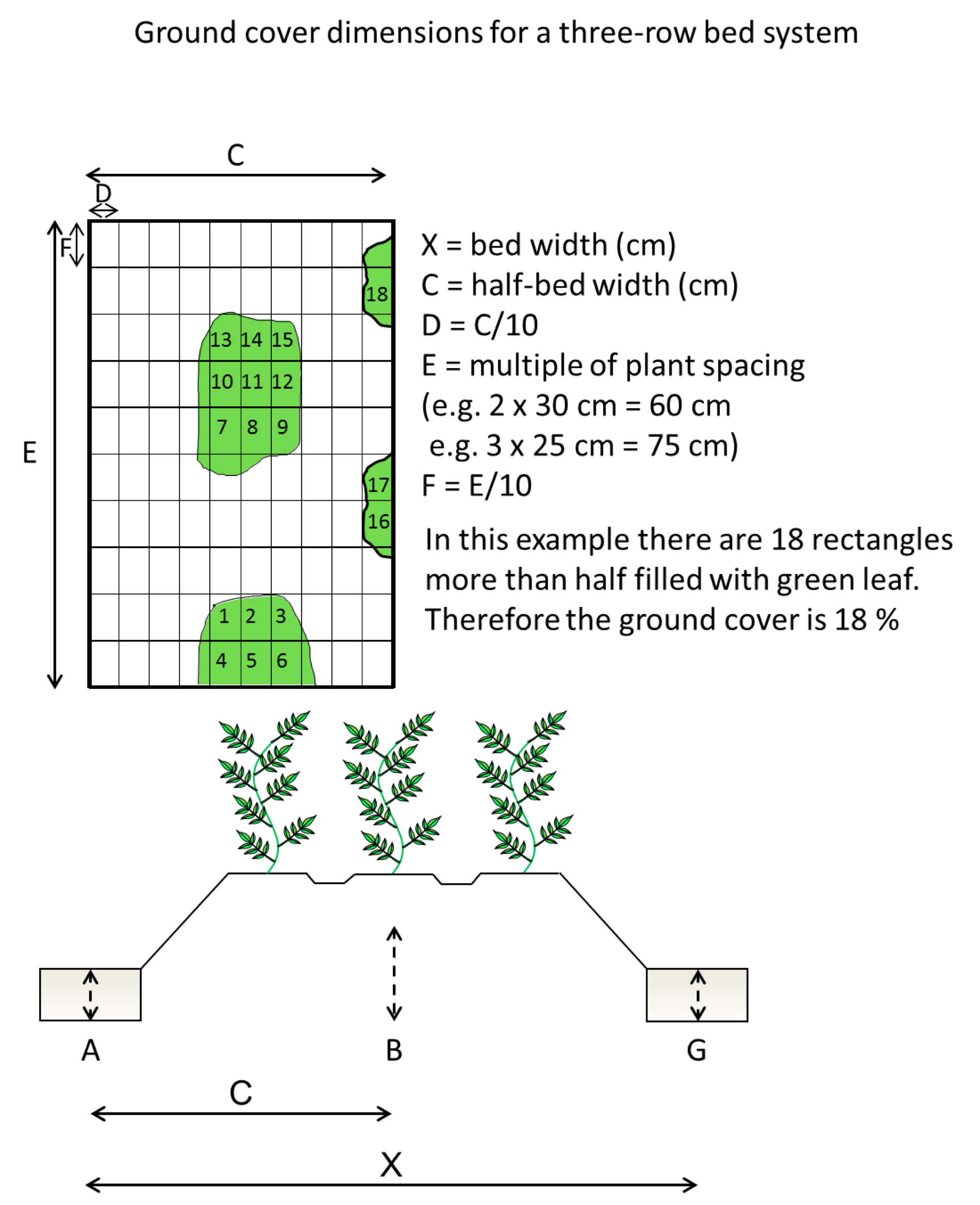 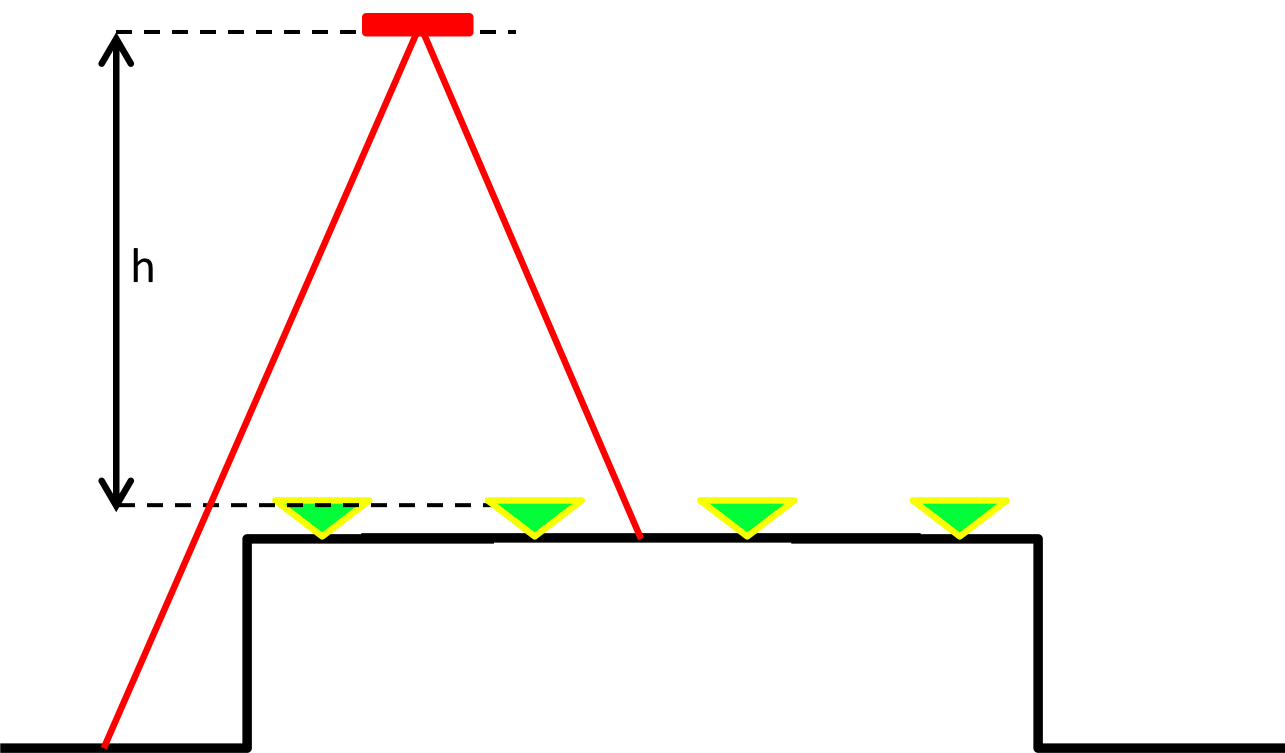 Figure 2. Orientation of phone or tablet in relation to rows/furrows in four-row bed

Number of replicates and  sample location

Crop growth and yield are spatially variable and this is particularly true for potato crops. To ensure that the measurements of ground cover and yield samples are representative of the entire cropped area, then the crop must be sampled in a minimum of three positions (Figure 1). It is also important that sample points are positioned in areas that appear representative of the majority of the crop. Avoid atypical areas (nematode/diseased areas, fertiliser/herbicide misses or overlaps etc.). Also, avoid headlands, spray/irrigation-wheeling or rows adjacent to these wheeling, edges of the field, previously-sampled areas and any other areas which are obviously unrepresentative of the crop. If the field is irrigated by rain gun, ensure that the sample point is at least 50m from the edge of the field along the ridge.

If more than one seed size/stock has been planted in a field, ensure that the sample replicates are representative of the relative areas planted with different stocks. Alternatively, treat each seed size/stock as a separate ‘crop’ and take a minimum of three samples from each area planted with the same seed. A decision should be made at the beginning of the season as to which plantings within a field will be sampled and then measurements always be taken from that planting. In many cases, it will be sufficient to  sample the planting that occupies the majority of the area of the field.

Likewise, if areas of the field are considered distinct, it may be necessary to treat each distinct area as a separate ‘crop’ and always take the samples from within these crops. Do not combine samples from distinct areas within a field. Reasons to consider areas within the field as different crops include: more than one variety,  differences in use of polythene, sprouting, date of planting, field cropping  history etc.

What height should the phone/tablet be relative to the top of the crop?

If the device height (‘h’ in Figure 1 and Figure 2) was kept constant throughout the season as the crop increases in height (and the effective distance between the device and the top of the canopy decreases) the image would not contain the correct proportion of green-canopy and bare soil due to the effects of parallax. This effect can be reduced by maintaining h relative to the top of the crop through the growing season. It is essential that the appropriate value for h for a particular device and planting configuration is determined at the start of the season. As the crop grows this predetermined height is then maintained above the top of the canopy. For guidance, an iPhone 4 (with a field of view of 61°) h is c. 80 cm for an average row width of 91.4 cm (36 inches).

Orientation and levelling of the phone/tablet camera

The device should be held so that short-axis of the image is parallel to the direction of the row (i.e. the images are in landscape format).  The spirit level device that is built into the app should be used to ensure the phone/tablet is being held horizontally. The spirit level is the two rectangles at the edges of the camera screen. These show green or red indicating whether the phone / tablet are level. After the image has been taken a preview will become available: check this preview to ensure that the phone was held level and was in-line with the rows. If not, delete the image using the red cross and retake a new image.

To ensure the reliability of the images and accuracy of the ground cover estimates users should take due care and attention when sampling crops. Earlier work has shown that the following common, avoidable, mistakes can cause error in the derived ground cover values:

Device orientation with respect to the crop

The major source of error in using the app is images being taken at incorrect height relative to the crop or the image being taken when the device is not horizontal or correctly orientated in the direction of the rows (Figure 3). Sections above explain how to minimise this source of error. 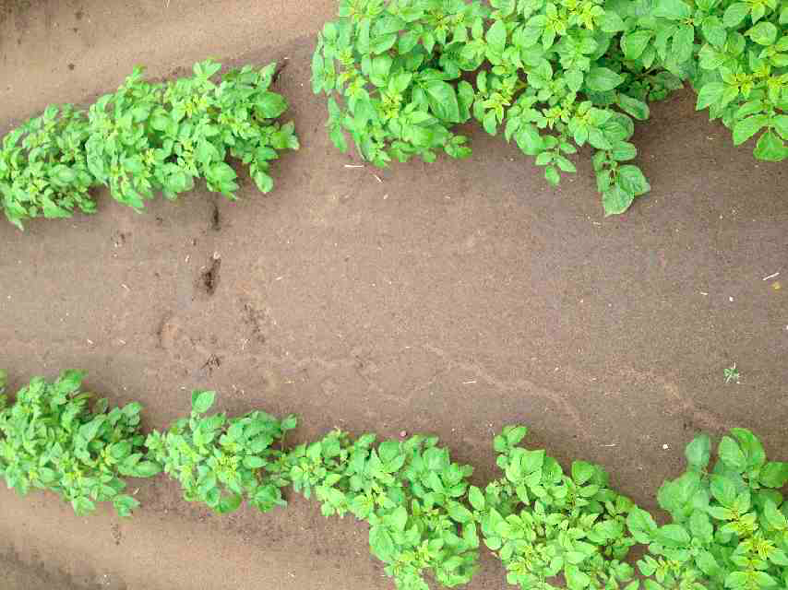 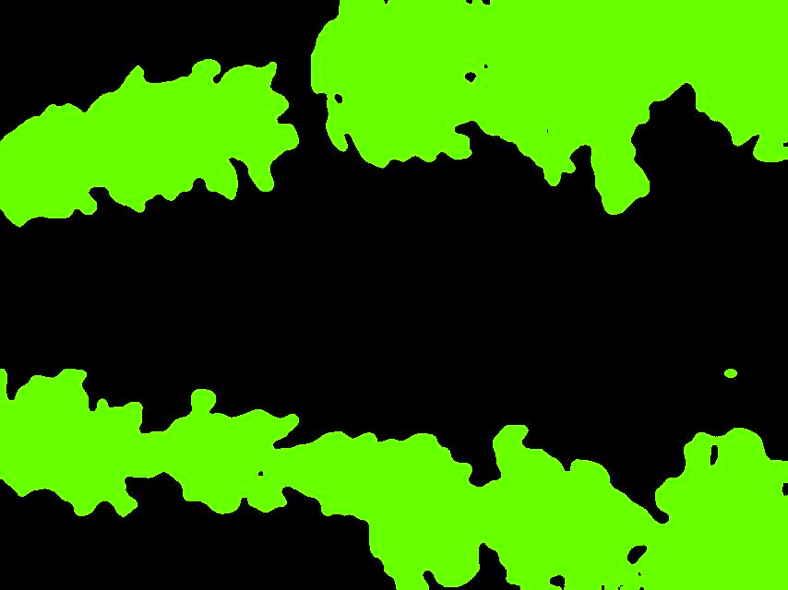 Figure 3. Example of image captured when camera was not horizontal (left) causing an overestimation of groundcover (40%) (right).

Allowing feet and legs to be included in the image often causes an error, especially if they are coloured green (Figure 4). This is a particular problem during the early stages of crop development when the ground cover is small. Minimise this error by ensuring the device is held away from the body and that feet and legs are not included in the image. 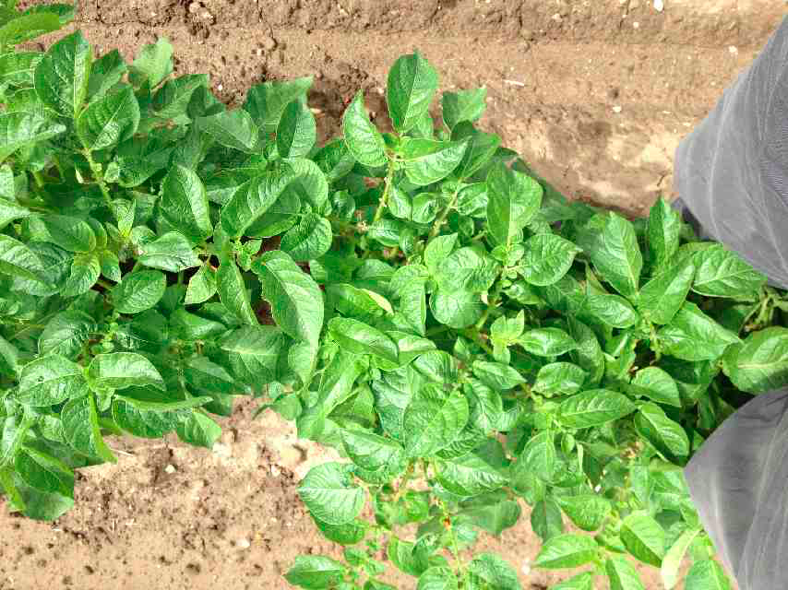 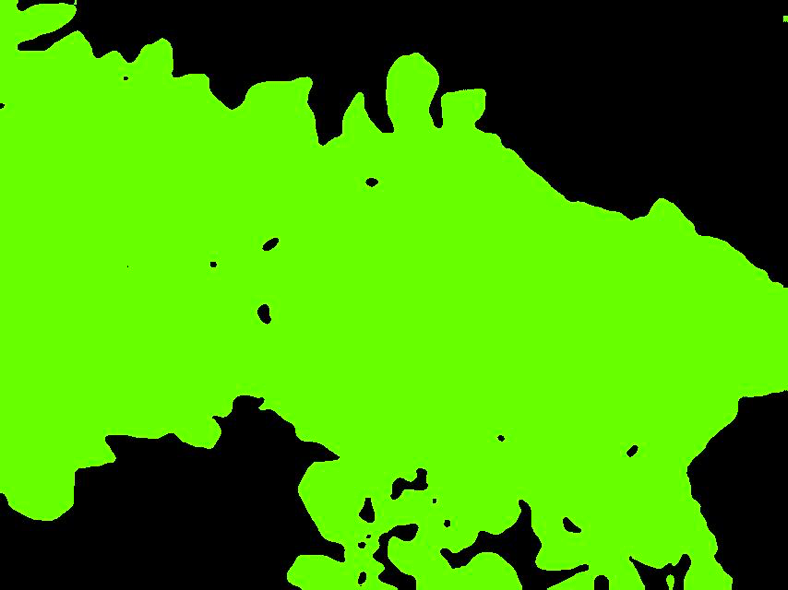 Figure 4. Example of image captured too close to the body. Inclusion of legs and feet have obscured canopy (left) causing an under estimation of groundcover (64%) (right).

The image analysis cannot distinguish between different plants. Weeds present in the sample location will cause an over estimation of groundcover (Figure 5). If weeds become a problem at a sampling site then move to the closest weed-free area. 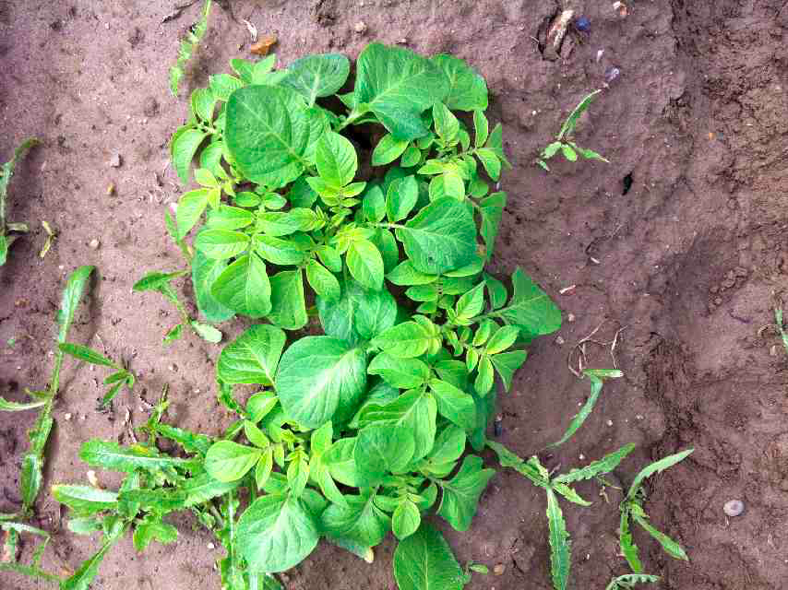 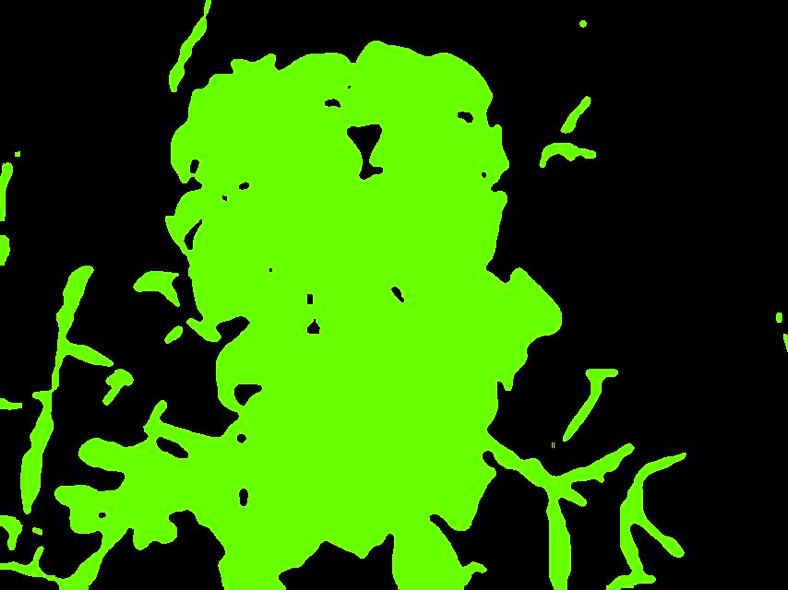 Irrigation pipes, especially drip irrigation (Figure 6), fleece or other field infrastructure will cause an error in the ground cover estimation. Best practice is to ensure that the image is composed of green leaf and bare soil. If possible, temporarily move the irrigation pipe or fleece out of the image view during image capture. 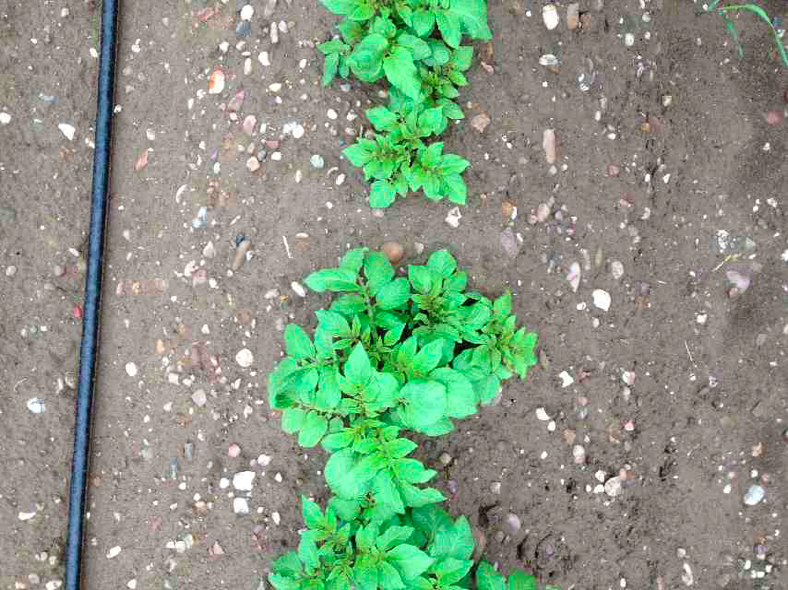 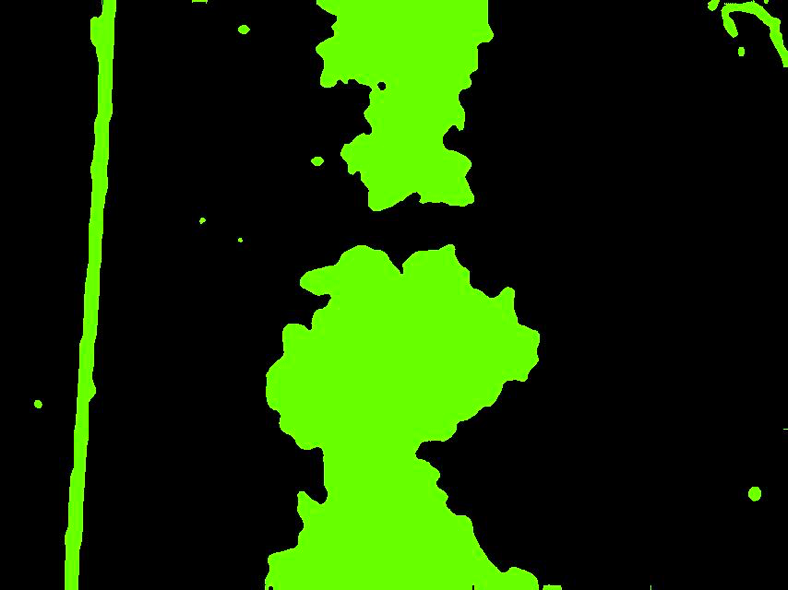